Do you suspect a leak around your window?

Do you know how far the water leak has actually graduated to?

We had a couple of calls this week from people who are experiencing leaks around their windows after recent heavy rain. One of the leak detections we did was in the Waikato region and the other in Whangarei. Both home owners couldn’t identify if the water was coming from the roof above the window and running down, or if it was a window joinery failure. 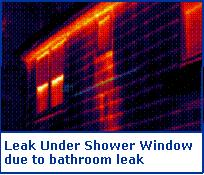 In both cases we used thermal imaging and a moisture meter to quickly identify where the problem was originating. There was also one other issue that came from the inspections as a result of the water leak. The insulation in the area was also wet. Once insulation in the wall gets wet it takes quite a while to dry, that’s if it dries at all.

One of the other windows in the Waikato home was in the shape of an upside down triangle, and the home owner had it fixed recently. Although the leak in the window joinery was fixed, the gib and insulation below the window appeared to be moist (80%+ on the non-invasive moisture meter), so the area hadn’t dried out after the correction. Wet walls can cause heat loss through conduction, and an unhealthy home. Your timber framework and structural integrity of the area is also at risk if moisture in the walls is left to sit.

In conclusion: Fixing a window leak is one part of the process… but finding how far the moisture has potentially spread is just as important to know. That’s exactly what we do without needing to pull down any walls (non-invasive process).

Suspect a leak? Contact us today for a moisture test on your walls and around windows!