One of the very common signs that you could have a leak or moisture in your ceiling space (normally flat roofs), is you can see signs of the gib board pulling back down over the screws that are holding it up. Have you seen small round marks on your ceiling the size of a screw head? That could be more than meets the eye.

One of the inspections we did this week detected the exact problem as outlined above, although the home owner had no idea what was ACTUALLY going on. They called us in because they had a damp smell in the room and couldn’t work out where is was coming from. 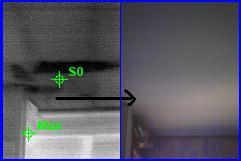 Those big black round marks are leaks detected as seen through the thermal imaging camera on the ceiling of the ‘damp smelling’ room… and the home owner has absolutely no idea these leaks even existed.

The home owners issue was solved within minutes… but finding the source of the leak in the butanol lined internal gutter was the next challenge. Well actually it wasn’t a challenge at all. Instead of using the standard 100mm overlap at the join of the butanol, the 45 angle in the corner of the internal guttering has caused the issue by flapping up slightly thanks to a shortfall in overlap on the join… not to mention that water that was pooling the area!

On the ceiling you could clearly see the gib fixing screw heads where the water had basically saturated the gib above and under the weight (and gravity) caused by high levels of moisture caused a slight sagging in the ceiling.  What to do next?

Step one is always to fix the source of the leak first. Then it’s probably best to cut the area open and pull out the wet insulation, otherwise all that trapped moisture could cause the ceiling to eventually sag right down and make a mess! It’s always good to have a visual inspection of the area in a situation where a roof has been leaking for some time, as mould growth could be taking place.

Here’s another photo of a leak at the top of a wall thanks to leaking internal guttering. The thermal image is over the top of the visual image how we see it during an inspection… If you have any ‘visual’ cues that something isn’t right with your home, or an unusual damp smell has suddenly appeared that wasn’t there this time last year, then jump straight onto it and get a moisture ‘check up’ on the house.