Do you have a deck over the top of your room?

One of the most common types of leaks we find is caused by waterproofing membranes not correctly installed underneath the doors leading out to the deck… any type of door.

One of the main contributing factors to this problem is the level of the deck. Under the ‘leaky building code’ of the late 90’s and early 2000’s, many homes where built in such a way whereas the deck level was very similar to the inside floor level. If there is any pooling of water on the deck, wind driven rain in the direction of the door, or a blocked drain (normally with leaves and debris on top), then water tends to rise up and over the raised lip of the butanol, then down onto the ceiling below.

Another common trait of a leaking deck is when the cladding runs down and touches the deck. Water will simply soak up the cladding then saturate the bottom plate and then potentially drip down onto the ceiling below.

Here is a sample infrared thermal imaging photo we took in a home recently:

Do you have butanol waterproofing on your deck?

If you have a leak in a room under a deck, there is a way to find the leak fast…

Recently I was called out to a home because the builder couldn’t detect where a leak was coming from. Although he suspected the deck was the issue, it was a matter of what part of the deck it was entering.

The righthand photo below shows the damage to the wall the builder caused while looking for the leak, and the lefthand photo shows exactly what I saw with the thermal imaging camera. The dark area at the top of the ceiling is the source of the leak which was finding it’s way down the wall and appearing around the skirting.

Rather then doing damage to your walls and guessing where the leak is coming in, give me a call. The thermal imaging camera could ‘fast track’ your remedial work, or potentially

confirm the source of the leak. 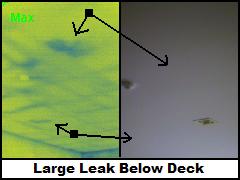 Do you have a room in your home that has a deck built directly above it?

Any signs of leaks on the ceiling or wall below the deck?

Today I did a leak detection on a home that had an interesting outcome. The home owner noticed a drip coming through the tounge and groove on a rimu ceiling. His immediate reaction was to suspect the leak was penetrating from around the decking above. The frustrating part was that he had the deck completely resealed just one year ago.

Using thermal imaging and a moisture meter, I was able to pinpoint the leak source… it turned out to be tracking from behind a wall in a storage cupboard on the second floor. There was a gutter downpipe that was built in behind the cedar cladding in one section, and as you would expect, the source of the leak was hidden in behind there. Using my non-invasive leak detection equipment I picked up the leak on the interior gib board that backed directly onto the drain pipe. The wall looked completely clean without any visual sign of moisture, so there was really no chance of finding it without thermal imaging unless the gib was pulled off… and that would still have been a guess.

After getting that far, we pulled out the measuring tape and took some measurements from the nearest exterior walls to see if the leak source would correspond to the area below where the leak was visually dripping from between the rimu boards. Our measurements were bang on target… so that was that leak issue solved!

This detection was another classic example of a leak coming from somewhere totally different then first thought.

Call us for a free over the phone quote on any moisture or leak issues you may have in your home!