Have you noticed water leaking onto your carpet at the bottom of a wall?

Water can travel sideways, so the leak isn’t always coming from the ‘obvious’ area…

Whilst doing a leak inspection with the thermal imaging camera at an office building recently, I came across a separate leak that the company had no idea was even there. As you can see in the lefthand photo below, the infrared camera picked up the leak on the carpet that wasn’t visible to the the human eye (righthand photo). 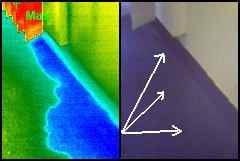 One of the reasons they didn’t know the water was on their carpet, was because the carpet was a dark blue colour… but regardless, the problem was still there. As you will see in the thermal image, the first area you would suspect the leak it tracking from is the window… but it turns out that wasn’t the case. The leak wasn’t coming down the walls, nor was it coming in from a deck directly outside. Is some cases, a builder may have popped a hole is the wall around the bottom of the window to see where the leak entry point may have been… which would have been a complete waste of time and money in this case. The tricky thing about water leak detection is that it normally isn’t tracking from where you think it might be.

In this case, there was a support pilon outside the building that had a ‘decorative’ plaster finish around it. At the top of the pilon was another ‘decorative’ parapet. This plaster finish was attached to the exterior wall right outside where the leak was entering the corner of the room. A roofer found the source of the leak in this case.